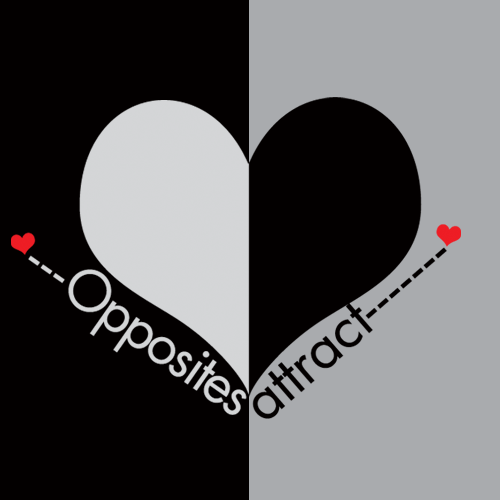 Imagine a love story where opposites attract: the popular guy becomes drawn to the shy bookworm, or the rich sophisticated woman falls for the hardworking blue collared man. In the movies, the ending is always the same-the couple brings out the best in each other with their opposite qualities and they live happily ever after. But for many couples, the trait that first drew them to their partner becomes a source of friction between them later on.  Can the old adage “opposites attract” transfer into a solid, long-lasting relationship?

The reverse would seem to be closer to the truth: we want a partner who is similar, who has the same likes and dislikes, who enjoys the same activities. Yet, for many couples, they were drawn to a partner who has traits that are in fact opposite of theirs.  In my and my husband’s story, I was first drawn to his athletic ability.  It was exciting and not an ability I thought I had.  With him, I was now mountain biking, rock climbing and going to the gym – things I had never done before and, turns out, I love doing.  This is why we often hear new lovers say “He/she completes me!”  They’re being exposed to new ways of being.  These differences are so attractive in the beginning stage of a relationship when you feel loved and accepted.  When we’re feeling connected and cherished, we are open to newness and dissimilarity in our loved one.

But often, that fondness for difference doesn’t last.  The relationship naturally moves out of that beginning phase and into a stage of challenge and difficulty.  At some point, and unintentionally, I began to resent my husband spending time doing sports.  It became the source of arguments between us. The very quality/talent/trait I once found so endearing had become a source of conflict.  I was angry that he spent so much time cycling and working out.  Why the change?  Because in this difficulty stage, we are, at times, feeling challenged, hurt, lonely or scared (for reasons not connected to any trait).  The relationship feels SO different from how it used to.  And when we have these painful feelings, we unconsciously revert to our old ways of coping and our old ways of behaving in the world.  For me, it was to return my focus to academics and career.  At this stage, that characteristic in our partner is threatening, not exhilarating, because that trait wasn’t something our parents encouraged in us as children.  We can come to hate the very trait we used to love in this person.

I overcame this by trying to understand my husband, turning my attention toward what this was bringing up in me and by changing my perspective.  I thought about the role athleticism played in his childhood – it was a source of joy and his escape from a not-so-great adolescence.  For him, it was more than just going on a ride – he did it to feel good and feel accomplished.  Next I had to explore myself – I was discouraged from doing many sports and adventures as a kid.  My parents balked when I asked to play ice hockey (granted, it was the 70’s and not the young-girl-power movement we’re seeing today).  From numerous experiences like that, I learned it’s not emotionally safe (and wasn’t developed in me) to be athletic and adventurous.  When feeling hurt as an adult, I turned to what had felt emotionally safe (what had been accepted by others) and turned away from the trait my husband exemplified.  Lastly, I changed my perspective.  I realized that my husband has been modeling for me an aspect that needed to be developed in me (athleticism) AND I came to know its value (to take care of my body with exercise and to have fun and excitement).  After a long journey, and many of my own therapy sessions spent talking about this, I am grateful.  He has been showing me all along how to do something I need to develop in myself.

Here are how opposites can have successful long-term relationships:

If differences in personalities are causing you difficulty in your relationship, we can help you implement these strategies, as well as others, to create a mutually satisfying relationship for both partners. Please feel free to call us at 908-246-3074, or email at GetSupport@CouplesTherapyCenterOfNJ.com